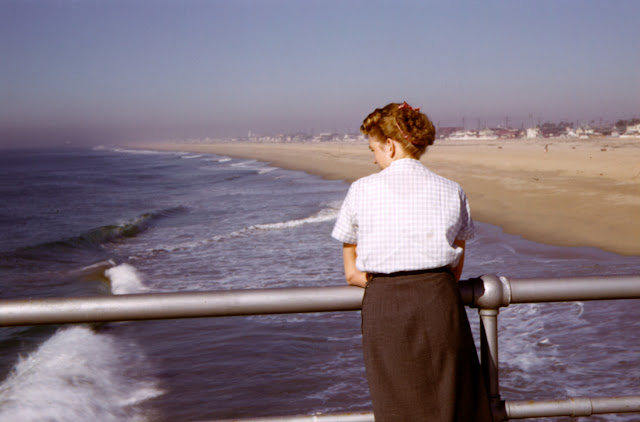 This photo was taken February 1953, after Dad's bout with polio when Mom and Dad drove down to the La Jolla area of Southern California.

The full story of Dad's polio is written in his book (pages 72-74), but I was interested in what Mother could remember, what details would flash bright in her memory.  This was dictated to Elizabeth in July 2021.

Susan was six months old when Sterling came down with the polio.  I had three small children and it was Christmas and he was out setting up television sets for people who'd bought them at the Store (Utah Valley Furniture Store).  The televisions in those days were complicated to set up, and Sterling was in and out of people's homes.  It was Dr. Webster who picked up on Dad's illness.  He looked at Sterling's symptom and said "I think he has polio."  So they put Sterling in the hospital and put him on penicillin.  They knew two people who'd contracted polio: one had died and the other was paralyzed.  [Note: The year 1952 was one of the worst two years of polio transmission; the other was 1916.]  So they took this very seriously.

Sterling was in the hospital and could get no rest because of all his friends would come and visit with him until late in the evening, watching ballgames, talking.  Meanwhile, all three little girls were home sick with the croup, and Mom was worn out going back and forth, trying to keep up both fronts.  Chuck Peterson, a family friend, finally said to Barbara: "the children need you more than he does; the hospital will take care of him." She spent more time at home after that.

Finally after one week of this, Dr. Webster sent Sterling home to get some rest (as he wasn't getting much with all the socializing going on in his hospital room).

These were scary times.  Sterling, as a salesman, made his living with his mouth, and polio had affected the nerve that controlled speech so he wasn't really able to talk.  He was Ward Clerk at the time, but luckily no talking was needed for that calling. And now he was home.

To keep himself occupied, he read a lot of books, and built several models: cars and ships.  He had to have something to do, and Mom was busy tending kids.  Sometimes he'd watch the children so she could go shopping.  His speech was impacted for a long time, until Arch Madsen gave him a blessing.  After that, he could do some talking.  We felt he had a weak recovery, and he didn't have perfect speech but enough that it gave him courage to talk.

Our friends, Bob and Maddy Hickle, invited us to come to Southern  California for a couple of days.  We knew them from our New York days, when we were in school.  There was a 2-room flat we lived in on the second floor, and we had a car.  So we could drive and we'd go places.  Maddy was a beautiful young woman, and an illustrator's model.  She had several of these magazines and she showed me which pictures were her.  She was wearing a hat in one of the pictures, but it wasn't hers.  She'd stopped by a department store and taken it out "on loan," then returned it after the sitting was finished.  She was from LA  and was more experienced than I, and knew to do this.

So Dad drove us down to Southern California, and we were in a motel (Bob and Maddy didn't have room in their home), and we spent two days at the beach.  We relaxed, slept, talked, and walked on the beach.  It was R & R for him.  He needed a lot more of that, but we headed home after a couple of days. 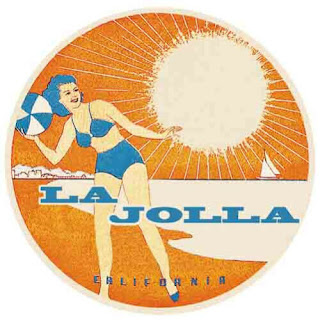 When the polio vaccine came out, I lined my kids up and they got their drops on a sugar cube.  There were actually two types (Mom remembers).  The first type was the live polio vaccine, called the Salk vaccine.  The second type was dead polio viruses, which were administered by shots to the adults, and the little kids got sugar cubes.

When I asked Mother about other vaccines, she said her mother was always interested in the latest.  Mother's older sister Martha died as a baby of Whooping Cough, and so Grandma Bickmore was always aware of science and breakthroughs.  When the vaccine came for Whooping Cough (pertussis), Mom left high school in the middle of the day to walk down to the doctor's office to get the shot, and then she walked back.  Grandma B. wanted her first in line.

Email ThisBlogThis!Share to TwitterShare to FacebookShare to Pinterest
Labels: A Story in Her Life